The Hill Tribes of Thailand

The Hill Tribes of Thailand

Who are the Hill Tribes of Thailand? They are ethnic minority groups who migrated many of hundreds of years ago from China, Myanmar and Laos to Northern Thailand. The groups settled in the hilly area of Thailand, giving them the name ‘hill tribes.’

There are around seven major hill tribe groups of Thailand and each group has their own language, culture and customs. The groups are; Lisu, Mien, Palaung, Karen, Hmong, Akha and Lahu. Historically, the groups were left to their own and lived their lives in the highlands of Northern Thailand. However, coming into the 1950’s, the government was forced to exert more control over the groups as forest reserves diminished, poverty increased and an increased risk of insurgency, lead to a need for more management. The National Committee for Hill tribes was then founded in 1959 with the goal to integrate the hill tribe communities into Thai society. This was also in place to support the tribes with the transition and to preserve their traditional culture and practices.

This policy still remains today, and it is important to be aware of the different groups upon travelling to Northern Thailand. Here we will give you a little background into the groups and how you can easily identify them.

This group originated from Tibet through Southern China and make up 4.5% of the total hill tribe population. Lisu is made up of two subgroups, this includes; The Flowery Lisu and The Black Lisu.

While the Lisu group have no written language of their own, over the years Christian missionaries supported them to ‘organise’ their language. Due to their influence, a majority of Lisu’s today are Christian.

This group is believed to have migrated from China and have inhabited Thailand for hundreds of years. The groups language is Hmong-Mien which is a form of Sino-Tibetan. This language is only for speaking and they do not have an alphabet for writing. When they communicate in writing, they adapt alphabets from Hanzu language.

You can’t mistake a Mien woman; they wear a black shirt with red accessories around their neck and stripy pants.

More recently, the Palaung group settled in Thailand from Myanmar to flee persecution from the Burmese military. 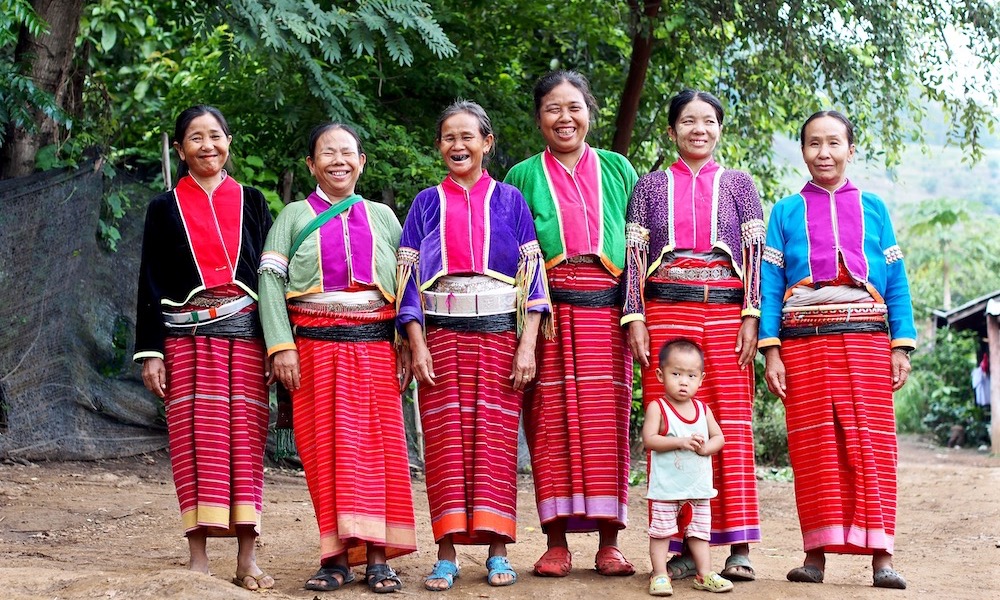 Their traditional dress is quite noticeable, including bright red colours. The women also wear silver hoops around them which is understood to be a form of protection for them.

One of the largest hill tribe groups in Thailand is the Karen group. Their population is estimated to be around one hundred thousand. There are four major types of Karen, known as; Sgaw (White Karen), Po (Red Karen), Pa-O and the Kayah.

The most famous subgroup of the Red Karen are the Karen Long neck tribe, who are well known for the long brass coils worn around their necks. Karen villages are spread throughout the countryside of Northern Thailand and can be found in almost every province, such as; Chiang Rai and Chaing Mai.

The second largest hill tribe group in Thailand is the Hmong hill tribe. This group migrated from China and are now living in large numbers in Myanmar, Laos and Vietnam.

The group is mainly known for their production of colourful embroidery, hemp textiles and batik techniques. The group is the most business savvy out of all the tribes and as a result are the wealthiest.

The Akha hill tribe group came to Thailand at the beginning of the 20th Century. There are now roughly 80, 000 living in Thailand today. The Akha are superstitious and hold strong beliefs of the spirit world. They have unique spirit gates that identify the border between the spirit and physical world. They are important and should not be touched by a human or they believe bad luck will be cast upon them.

This groups also goes by ‘Muser’ which means hunter in Burmese. This is because of the groups superior hunting skills. Within the group there are five main sub-groups, this includes; Red Lahu, Yellow Lahu, Black Lahu, White Lahu and Lahu Sheleh. The Black Lahu make up 80% of the group's population.

The group wear traditional clothing, Lahu women will be seen in red and black jackets and the men in loose fitting green or blue pants.

If you’re planning your next getaway, have a look at our challenges in Thailand. You will be surrounded by amazing culture and colours. Everyone who comes back from Thailand learns something new and ignites a spark for their understanding of the world.